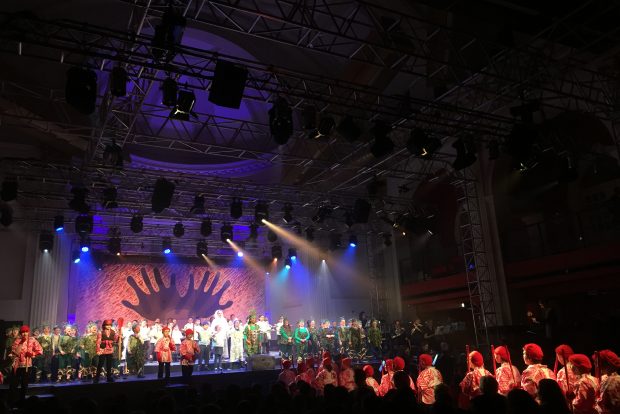 This project, that launched the Into Opera company, premiered and was performed over two days at Norwich Open in late January. The journey to get there was in many ways of equal importance than the final outcome. Over a period of four months, performance, music and design for the piece was built through a series of workshops across four primary schools: Sprowston, Avenue and St Francis of Assisi in Norwich and St George’s in Great Yarmouth. The schools were asked to fully engage with the poetry and moral dilemmas of the story, written by Andrew Hawes, and take the music written by Patrick Hawes into their teaching as a basis for other elements of the curriculum such as mathematics, movement and literacy.

There were 160 young performers on stage, but behind the scenes, there were as many putting their energies into drawing, making and painting.

As designer, I worked with all the schools to promote awareness of design generally and specifically, to harness the visual imaginations and skills of the children. The staff were magnificent – they embraced the project and supported their pupils in designing both scenic and costume elements to a brief that, I hope, gave both structure and scope to their creativity.

It is hoped that this first Into Opera project has formed a blue print for future incarnations of A King’s Ransom in other parts of the UK. Click here for more information about Into Opera’s widening participation remit.