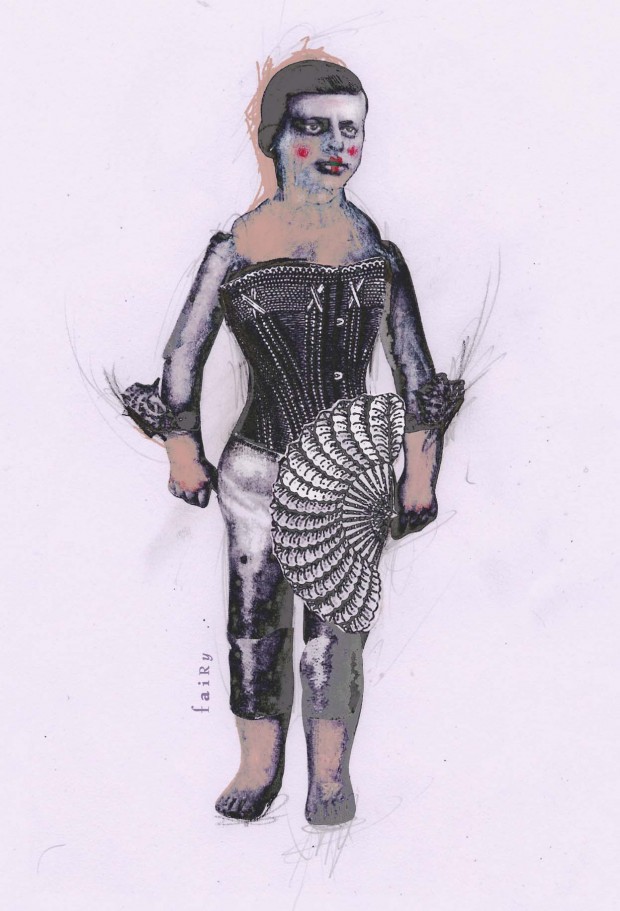 My over-arching concept drew on Benjamin Britten’s opera by designing from the perspective of the spirit characters who question human experience. The design first visually neutralised and homogenised the performers to provide a ‘blank canvas’ upon which to overlay the spirit’s outward appearance of human types.

I designed a unifying body-aesthetic for the acting ensemble by matching hair colour, painting faces, shaving and waxing bodies and composing uniform proportions through the precise arrangement of costume elements bespoke to each performer’s anatomy. This scheme transformed the acting ensemble into a set of Victorian, androgynous mannequins. I referenced images of dolls, dressed in a combination of male and female foundation garments. I overlaid this with character-specific costume elements and built images that described the spirits’ mimicking of their human counterparts: archetypes of gender and social caste.

The scenic design referenced the aesthetics of Jan Švankmajer’s stop-motion animations that was also echoed in choreographic movements [and resonated with my Czech upbringing]. The designed floor folded into a 3D stylised miniature house that enabled revelations and disappearances. I designed an open acting area surrounded by strings of suspended white antique chairs that echoed the actor’s use of conventions of flashback, freeze frame and flash-forwards, in telling and retelling the story. The design aesthetic paid homage to Sally Jacobs’ 1970 RSC production. An unseen steel skeleton supported both the chairs and layers of magnified white lace that gave the space a sensuous and ephemeral impression. In counterpoint, the performance was fast and often violent, so the set also provided a challenging environment that helped signify the separation of theatrical realities and gave performers possibilities to run, climb and perch; thereby supporting Propeller’s hallmark physical style.

The production was subsequently developed into a truncated one-hour version specifically for younger audiences called the ‘Pocket Dream’ and became a model for the dissemination of Propeller Theatre productions through both the performance and publishing of play texts, with the ‘Pocket Propeller’ brand, including a design section that I wrote and illustrated.