Designing a visual narrative for ‘Richard III’ that echoes Shakepeare’s text is, in some respects, fairly straightforward. Like Macbeth, the story relies on a central character’s journey into a disturbing underworld of psychosis and ultimate self-destruction. The design can’t afford to hold up the momentum of his slide into a hell. What the play allows for is the full range of visual and physical possibilities for that journey – what is the context in which such a character can surface with such ferocity and then be conquered? Who will be responsible for creating his nemesis? How can we actually see the workings of Richard’s mind in a similarly dramatic way to the confessions and quips he makes to the audience,… and should we see them?

Propeller Theatre celebrates the contribution of all performers who, in many productions, knit together as a chorus who collectively personify a subtext – the identity of this group is an intriguing design challenge. They add significantly to any image as passive voyeurs or protagonists-in-waiting. Half in, half outside the story, they can represent an underlying theme in the drama. When that story is essentially about a single persona such as Richard Duke of Gloucester’s, it’s hard to see where the chorus idea might fit in and could even be a hugely unwanted physical presence or visual distraction.

Western civilisation having dragged ourselves out of the disaster of 20th century despotism crashing against a worldwide groundswell of democracy that induced so many often necessary, but brutal conflicts, there were plenty of modern parallels that could be made with Richard to hook a design concept on to. This, Propeller’s ‘Richard III’, was linked to the others of Shakespeare’s Histories that we had produced thus far by 2010 and we had been running periods of clothing and objects in the productions backwards in time from 1950, so that at this point in the series. the escalating brutality of the cycle could be dramatically counterpointed with increasingly tight and formal sartorial etiquette. So we settled for mid to late 19th Century dress codes and started the play with the dregs of a banquet that quickly degenerates into La Belle Époque excess. 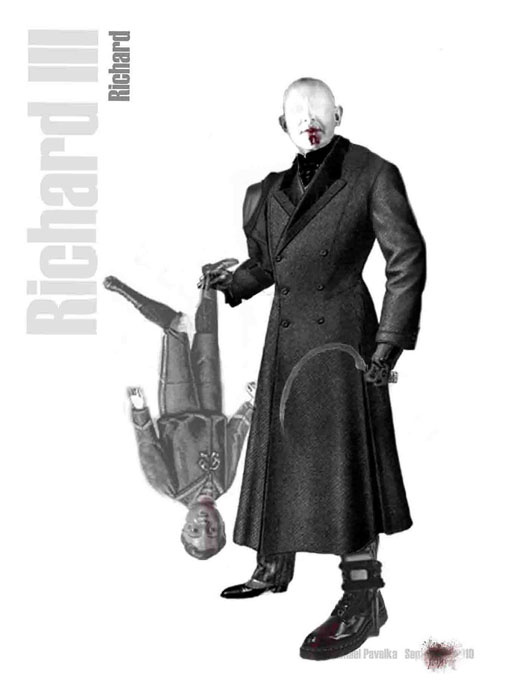 But what of our Chorus? We decided to turn Richard inside out. Rather than explore the external context for his ‘mission’ the foundations for which had been explicitly mapped out in the three-part History previous to this, ‘Henry VI’ (Propeller’s two-part version ‘Rose Rage’), we explored the internal motivations, exposed them and expanded them into a physical reality – splitting Richard’s psyche into a squad of masked, white-coated but grubby Victorian hospital orderlies that looked more comfortable in Bedlam than exposed on stage

The logical progression of this idea was a scenic world of mobile surgical screens and a pivotal operating table that contorted into a throne, tomb or warhorse. A functional zip up tower from a builder’s merchants became ‘the bloody Tower’ complete with a range of DIY tools of mass destruction and the whole space framed by contemporary trussing that supported the occasional use of a full-height, slashed, plastic abattoir curtain. The design was therefore more of a psychological space than any geographical location but constantly counterpointed by the anchor point for Propeller’s history cycle, a ubiquitous flagpole and cross of St George. 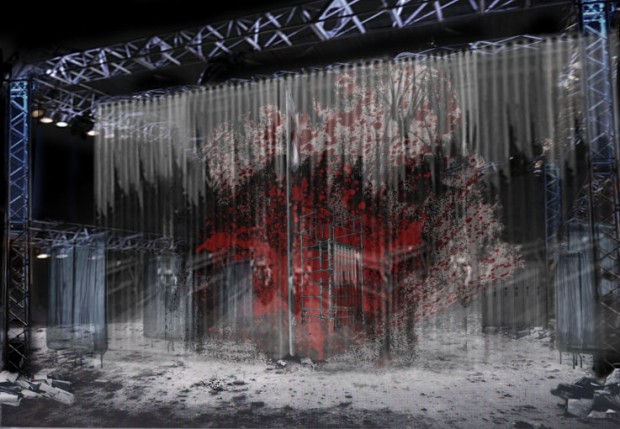 What of the characters’ clothes? A costume design isn’t complete until a performer is using it. So a costume drawing, particularly one that involves an actor crossing boundaries of age or gender, is simply a graphic way of positioning ideas, posing questions and starting a collective debate. The result is, hopefully, an interesting collision of contrasting ideas in a memorable image that is flexible in performance and so harmonising with Shakespeare’s layered narrative.

The clothes for Richard resulted from harmonizing the production’s period costume starting point and a collaborative conversation with the actor playing the part, Richard Clothier. He asked me think about asymmetry and the possibility that his ‘withered hand’ might have some sort of crude prosthetic that might have interchangeable accessories to suit both his social obligations and his nightmarish cruelty. I gave that a gothic twist, using F.W. Murnau’s film masterpiece ‘Nosferatu’ as a touchstone. 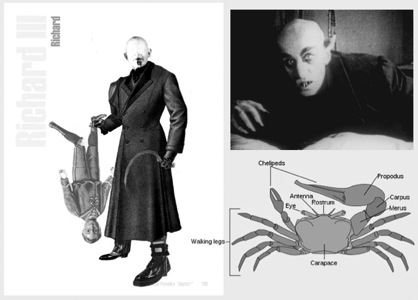 The women’s characters, played by male actors in Propeller’s vernacular physical approach, were a mix of the formal dress of the period for both genders – essentially a male torso and female below that – giving them a grounded silhouette and supporting the actor’s feminine movement and posture. 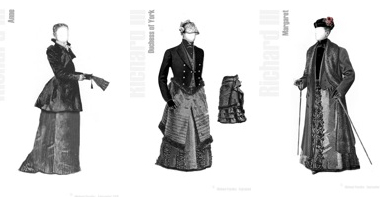 Costume designs for Anne, the Duchess of York and Margaret

In the final scene and in true white hat (hero) black hat (villain) tradition, England’s saviour, the Earl of Richmond, appears with ‘the cavalry’, dressed in an impeccable contemporary two-button business suit to finish Richard off with a hand gun to close the circle of design anachronisms: back to the future. The cavalry in this instance being Richard’s own psychosis as represented by the now turncoat hospital orderlies.

‘Richard III’ can at times read as a tragic-comedy as much as a warped historical commentary and it certainly plays like that on stage. It’s an entertaining sideshow of gothic horror but also a warning shot across England’s bows. If handled deftly, design has the ability to reflect the clash of themes and tones that Shakespeare composes by making references to recognisable icons that appear and evaporate hopefully before the audience loses it’s faith in a familiar image (cliché?) and therefore the production’s credibility. Guns N’ Roses. The restlessness of the history plays is a set and costume designer’s gift to make visual triggers that affirm our collective memory, and make it a fleeting but powerful reality.