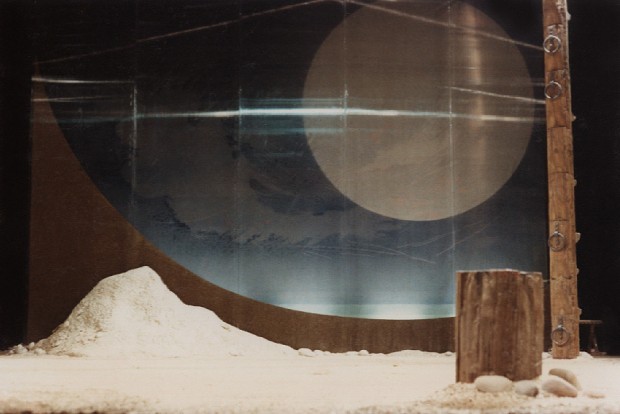 The world premier of Derek Walcott’s stage adaptation was my and Gregory Doran’s debut project for the Royal Shakespeare Company. It was also the second production in the newly built third venue: The Other Place. The production subsequently transferred to the Barbican with a new set design. The challenges, but also tremendous opportunities were its sheer scale, echoing Homer’s original epic. Derek, who received the Nobel Prize for literature during the project, wrote and rewrote not only the dialogue during the rehearsal process, but also made seismic shifts in its dramatic structure – and the design process had to keep pace.

In discussion with Derek and the creative team, we approached the piece from a carnivalesque viewpoint, dodging between periods and cultures as if Odysseus had been caught in a time warp redeeming his past and divining his future. Derek’s passion for the story and many of the influences he brought to bare on the script came from his St Lucian background, and so a kaleidoscopic aesthetic suited the rapid gear changes in the text and the Aegean/Caribbean crossover.

On a limited materials budget, but with the terrific support of the RSC’s Costume Department, the hundred or so costumes were created using both contemporary man-made materials and techniques, and textiles from across the globe.