Designing an epic like ‘Henry V’ could be an assault course. Just when you think you’ve leapt one hurdle there’s then a ditch, then a river and then something nasty round the bend.

In many respects the story is simple: it’s linear, dynamic and serves the central character’s journey – but that’s also a design challenge. How do you make a space that helps the ensemble keep up the pressure, turn the screw, win the day?! Edward Hall and I will spend many a meeting with script and sketchbook and, together, imagine a world that seeks to honour Shakespeare’s intensions but in a contemporary visual language.

We have conceived an interior space, a bunker, a barracks; fortress England, in which the darkest fears and proudest euphoria of a soldier’s imaginings can be shared across a darkened room. Ed and I sit in front of the carefully crafted model of our production’s scenic world,… now what? Discussion, debate, speculation, frustration occasionally but with Propeller, always satisfying – call this ‘work’?!

I drew a full sequence of storyboard images that scope the dramatic landmarks of the production before the company rehearse. They can start as doodles in the margins of my script and notes in Ed’s, emerge from our individual copies and become a third, shared vision for the production that we can present and hopefully inspire the ensemble of performers and the team that are Propeller Theatre: to recruit our company.

The scenes change shape through the rehearsal process but the concept seems to hold up. Part-gym-part-parade ground: the designed ‘tool kit’ for the story is tested to the max by the boys in the rehearsal room, itself perhaps a parallel for the retold fable that is England, and tested “Once more…” for the audience.

The key to unlocking this production undoubtedly lies in how we allow the audience ‘make imaginary puissance’. There are objects in the space that help us to remind the audience that Shakespeare is dealing with ideas first, and immersion second. Take the two punch bags that we’ve placed on either side of the stage, for example. The scene in which Pistol wrangles, beats and torments his French prisoner for a promise of ransom won’t be effective if the audience are asked to witness a stage fight – it won’t be real in any sense. So how does the scenic world help the Propeller ensemble ‘do real’; do violent actions that the audience can stitch together with the dramatic situation. Two masked chorus thrash the punch bags will the full force of baseball bats whilst the characters make actions and reactions without full contact – it’s the audience that piece the two with their imaginings of pain with every thwack.

The creation of women is openly declared, constructed, architectural and, of course, a design opportunity. Princess Catherine has the interval to prepare her image but [with Propeller] in full view of the audience. She applies make up, is bathed, accompanied by the chorus of troops and is presented with her anachronistic late Elizabethan dress – she is dressed for her role both politically, poetically and theatrically.

The all-maleness of the company stimulates our collaborative process and make clearer the onstage game of tag that characterises good ensemble work, a game without the complication of blatant sexual chemistry. Depictions of gender can be reserved and deployed as simply another stylistic idea serving the narrative rather than a sideshow of naturalistic voyeurism. 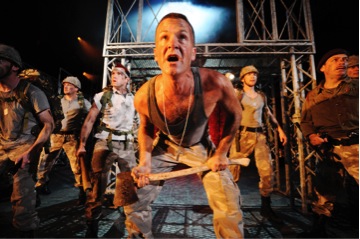 The audience is constantly reminded that the actors are (very skillfully) pretending – which in turn requires the audience to collaborate in the pretence. The audience are therefore a crucial part of the ensemble. If they can agree to suspend their reality as the actors do and the scenography contextualizes the game, then anything’s possible – leaps in faith, time, space and conventional storytelling logic. I design ‘plastic’ worlds in which this can fluidly happen.