Off the Wall was a site-specific spectacle to re-open the refurbished Royal Festival Hall in 2007. Liam Steel and Rob Tannion of Stan Won’t Dance were commissioned to create an event that brought together an international cast of dancers, aerialists and circus performers along with a choir and Canadian parkour artist Troy Feldman – well over a hundred performers in all.

The performance was designed to use as many of the buildings as possible on the southern aspect of the South Bank Centre; the audience of 2000 gathering in the piazza at dusk.

The sheer vertical concrete, stone and glass faces of the surrounding buildings were used as surfaces for dance and acrobatics. The narrative, devised over a period of two months, relied to a large degree on the design to unite groups of characters and focus the ‘fugitive’ principal lead (Troy Feldman).

We up-cycled key design components from Revelations to alter, change or enhance the brutalist facade on the Hayward Gallery and performers echoed Anthony Gormley’s statuesque figures that punctuated the skyline. The sources of influence were varied – from Blade Runner and the Alien series to Metropolis and manga graphic novels. The challenge was to design characters by radically changing the silhouette, texture or movement of the body viewed at a considerable distance against a bland concrete ‘cliff face’. Hi-viz colour and strong contrasts were crucial.

The artistic and technical team created a fantasy world of the future where people run up walls, skim across rooftops and defy the laws of physics and physicality. The event was an hour-long and presented a futuristic vision of the South Bank complex, celebrating the triumph of human will over oppressive regimes. 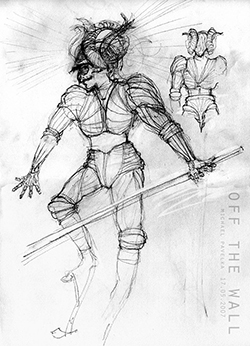 See the video and drawings of this production that represented the UK at the Prague Quadrennial exhibition in 2011.