“This is a modern-dress production, though in Michael Pavelka’s clever and evocative design the piece seems to occupy two different periods: the present, with an all-too-recognisable beer-swigging, boorish lad culture, and the Second World War, a period which revealed the British character at its stubborn, good-humoured best. What startles is that Shakespeare so brilliantly captured these two contrasting aspects of national identity 400 years ago. The entire cast wear military fatigues, and the low-life scenes set in a boozed-up Naafi, are superbly played, with fights breaking out and the entire cast singing an “Ere-we-go, ere-we-go” style anthem especially written for the occasion by Billy Bragg.”   Charles Spencer, Daily Telegraph [4.9.2000]

Henry V was an opportunity to link the Propeller’s work with Shakespeare with main stream theatre production – the Royal Shakespeare Company. The company of performers doubled that of Propeller in number and included both male and female actors. The story was told by a lost fighting unit using the debris of battles lost and won. The part of Chorus was shared throughout the company; their reason for telling the tale was to recapture their honour and attempt to re-enact their histories. 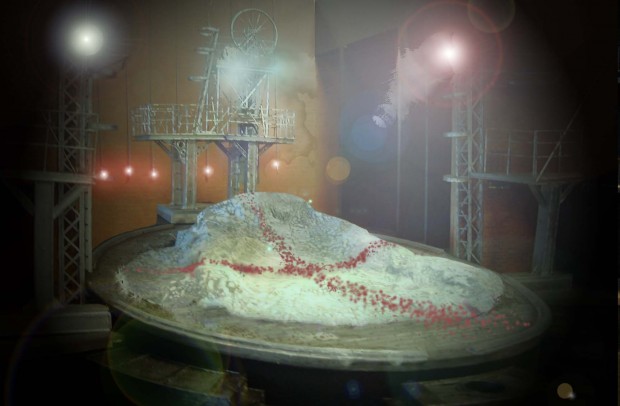 The resources behind the RSC gave us the means to expand scenographic ideas by harnessing the strength and presence of a large chorus.

The story was told by a lost fighting unit using the debris of battles lost and won. The part of Chorus was shared throughout the company; their reason for telling the tale was to recapture their honour and attempt to re-enact their histories.

The scenography drew on iconic imagery from the warfare of a violent C20th that had just come to a close and hadn’t yet experienced the fallout of 9/11. In some respects the images were consciously nostalgic; sentimental even – asking the audience to distance themselves from familiar pictures and reflect on their powers of seduction.

Katherine was ‘created’ by the soldiers for the audience as an idealised image – an historical and sexual fantasy figure for Henry to possess.

The story was presented from the footplate of a monumental tombstone. The colour palette for the story was stabbed with St. George’s red and white, the objects looked as tired and as recycled as their symbolism.

One motif that translated directly from the Propeller rehearsal process was the depiction and physicality of ‘laddish’ behaviour.

Violent acts were translated to objects, such as punch bags, so that performers could use the full force of their bodies – the effects of the aggressor’s actions therefore fully motivated the reaction of the victim.