This exhibit was part of the Transformation & Revelation: UK Design for Performance 2007-2011 exposition of stage design that showed over 200 designer’s work. Both the PQ11 and V&A exhibitions were magnificently curated and designed by Peter Farley. This piece was selected to represent the United Kingdom at the Prague Quadrennial the following year, comprising my video edit of the performance and suspended process drawings of Off the Wall – a devised, futuristic spectacle to reopen the transformed South Bank Centre.

I worked closely with Liam Steel and Rob Tannion to create a street fabel that incorporated a large choir, parcours, circus and dance; well over 100 performers in all. The ambitious site included the exteriors of the Hayward Gallery, Royal Festival Hall & piazza and adjacent offices. We collected, swapped and amalgamated stories and matched them to diverse images, often drawing in each other’s sketch books until their origins became untraceable. Our preoccupations were the gravity of a mechanized lifestyle as epitomized by the brutal site, and contrasting release of weightlessness.

What surprised us was how dynamic this collection of architectural forms were to work with, using their height, opacity or transparency to transform their appearance or overturn their everyday use. We added geometric structures such as a skeletal grid and geodesic dome and linked the roofs with zip lines across concrete canyons.

Our challenge was to make maximum visual impact using single or multiple bodies to create a human story in an inhuman environment whereby a single voice became a choir, a tiny spark became a flame and an action became a formidable movement.

This exhibit features in Transformation & Revelation: Gormley to Gaga… 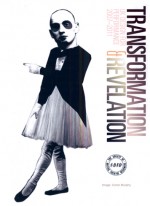