Designing a Dream: The Play Room

The scenic design for Propeller’s ‘A Midsummer Night’s Dream’ emerged from our thoughts about how the story could be told. We explored the play from the fairy’s perspective, from the spiritual side, puzzled by the mortals. We asked ourselves, “Whose story is it?” and, working backwards from Puck’s address to the audience that winds the play down… what is this dusty ‘hallow’d house’ that he refers to?

We imagined the attic of that house and distorted its properties – its shape, its atmospheres and its logic. The boarded floor folded, pop-up-book style, into a mirrored miniature house that enabled revelations and disappearances. Strings of suspended white antique chairs echoed the actor’s use of conventions that challenge time by telling and retelling the story through flashback, freeze frame and flash-forwards. The attic became a magical play room of possibilities where lace coverlets are magnified, objects defy gravity and toys come to life 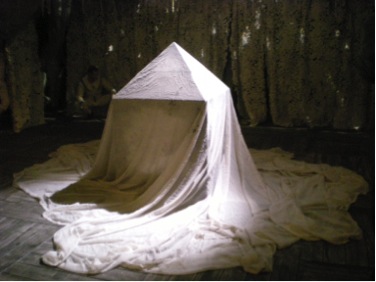 The set provided a challenging environment that helped the separation of parallel theatrical realities through layers and levels that also gave performers the possibilities of running, climbing and perching; Propeller’s hallmark physical style. I borrowed from the aesthetics and surreal worlds of Jan Švankmajer’s stop-motion animations [and that resonated with my Anglo-Czech upbringing]. In turn, this was echoed at times in the performer’s doll-like choreographic movements. The spectrum of the palette was de-saturated – do you dream in colour? I don’t. 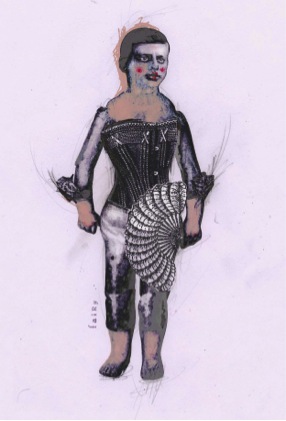 Costume concept for the chorus of Fairies (2009).

This is a costume concept drawing. It was a way of approaching a design for the identity of the ensemble. The principle was that the characters melted into the ensemble and were a product of the ensemble. To do that with integrity in terms of the context of the story and as with many Propeller productions, we gave the ensemble both a function and identity. So, what I attempted to do with this drawing was to present an image of a fairy: an image of wide-eyed innocence, combination of male and female genders, a blank canvas, an androgynous mannequin for theatrically dressing up into the mortal characters. We combined male bust and shoulders with a female corset and allowed the audience to see the performers physically build layers of human experience – in this production, through the etiquette of Victorian clothing.

The design presented a child-like view of the play with imaginative space for the darkness of adulthood.

This article appears in the programme notes of Propeller’s 2013-14 production of ‘A Midsummer Night’s Dream.