My job as Propeller’s Production Designer is often driven by the demands of hierarchy. Not so with Propeller: it’s a collective [ad]venture.

The term ‘ensemble’ is grossly overused and its ethic is not easy to accurately pin down. There are probably as many definitions as there are practitioners. Here are some that I’ve heard:

“All the performers are on stage all the time.”

“The whole story is told by a chorus.”

“All the performers have an equal voice in the rehearsal process – it’s ‘democratic.’”

“It’s a ‘collective’ – all the actors are paid the same.”

I have always been struck by the North American take on this, to include everyone in the entire organization: from backstage to box office. Here’s one that comes close, I think….

“The whole production is greater than the sum of its parts.”

Collective authorship of a production is the philosophical premise of Propeller Theatre and critical to the integrity of the design process, discovering what an ensemble means for all of us: not only performers, but also a complete creative, technical and administrative team.

The negative connotation of a collaboration being a conspiracy, in this case between theatre artists and the audience, is a useful one. It carries with it the notion that any live performance is an exclusive, perhaps secretive, experience. We are committing (a justified) treason against mass media and the anesthesia of its hysterical, repetitive image-making.

A Propeller performance is a one-off and the audience, will ultimately be centre stage. They are constantly reminded that the actors are (very skillfully) pretending – which in turn requires the viewer not only to watch, but to collaborate in the pretence. The audience are therefore a crucial part of the ensemble. If all present can agree, then anything’s possible – leaps in faith, time, space and conventional storytelling logic. I design ‘plastic’ worlds in which this can fluidly happen.

Performers are whoever you are prepared to accept they are – even that they are just ‘being’ themselves – the question is: how far will the ‘truth’ of performance stretch? Shakespeare is often prepared to unmask the actor at the close of a story, mid-story and from time to time in mid-conversation. I try to hint at the possibility that the performer may reveal themselves at any moment. The costume designs are often conspicuously a façade for the actor, hopefully instantly recognizable but just a whisker away from cliché or pastiche – literally a character you may have encountered in a story you may have been told in a childhood fable or, equally, in the pub. However, Propeller’s work fully exploits wormholes in time and space by thinking ‘out of the box’ and navigate improbabilities with a shared objective.

The design has to help make the physical demarcation between the layers of a performer’s reality clear for the audience in relation to the transitory telling of the story: to set some physical rules for the actors to follow but then break, and for the audience to enjoy the conflicts and contradictions that in a Propeller production can sometimes feel close to anarchy.

‘The Winter’s Tale’ offers us an opportunity to stretch our visual language from Sicilia to Bohemia and back again: to ask ourselves what we most fear in our relationships with one another and where we might go to escape the consequences of our actions.

The play asks for two sensitively designed worlds that are polar opposites and that counterbalance each other. ‘Real’ they are not, but, equally, both have to be recognisable – I have settled for the term ‘magical realism’. What might your ‘Oracle’ be? Where is your ‘Bohemia’? Through what turbulent experience could you really believe you have witnessed a resurrection? Spiritual moments.

The whole company have to create a totally convincing collective mise en scène, even if all the parts are operating in self-contained bubbles of reality. If they’re not actively in the scene, they are plucking stripped piano guts, blowing into bottles, tolling a ship’s bell, making wine glasses ring, breathing in the wings or singing – it is its synchronicity that convinces, being ‘greater than the sum of its parts’. 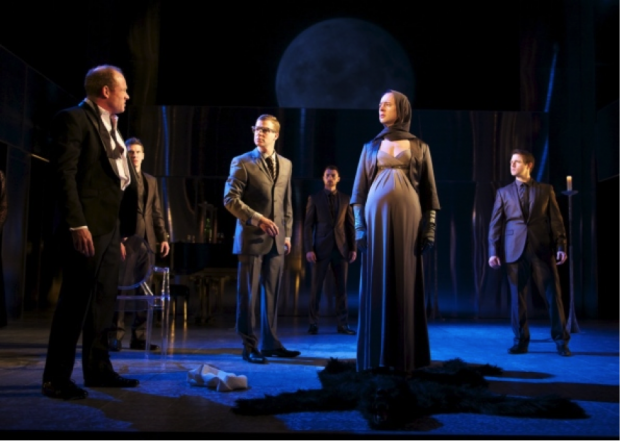 One extraordinary and rare feature of working with Propeller over the years is that I have the chance to rework a previous production. This means I can explore our evolving language of design for performance having had the enrichment of other works from the canon (and a bit more life experience) under our belts. It’s a rare privilege to work in a singular way, collectively. It comes close to the work of a painter exploring a repetitive subject or a composer’s indulgence in a leitmotif, variation or symphonic theme.

We have tackled this most enigmatic of plays twice, the first of which was, I felt, unsatisfactory – it was physically heavy, too ‘folksy’ and didn’t quite capture the universal spirit of the piece. The chance to retain the spatial principals but reinvent its tone by a radical change of architecture was an opportunity too good to pass over. As with many of Shakespeare plays, this story asks us to re-examine ourselves oh-so-closely and try to understand what he is re-presenting to us in the 21st century. In our second production of 2012, I used materials that both actually and metaphorically reflect fractured images of the characters merged with a more distant and diffused audience – the onlooker, our community, onstage.

This article appears in the Propeller Shakespeare play text of ‘The Winter’s Tale’   Oberon Books ISBN: 9781849434508